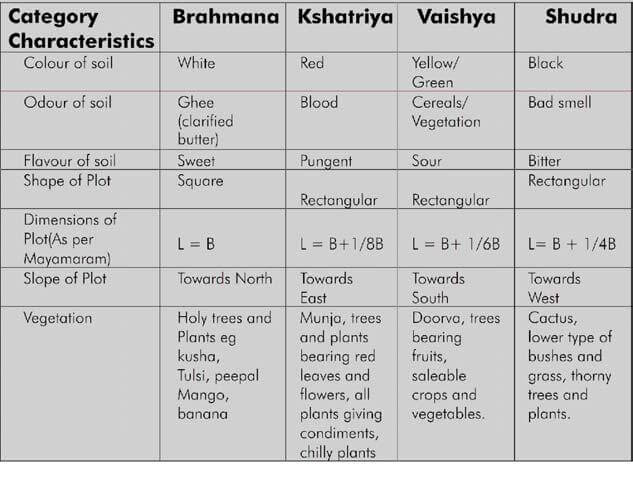 For soil investigation, preliminary investigation of the building site is made. The study of all neighboring quarries or cuts made in the nearby areas for construction purposes and of existing structures along with their foundations provides a very useful information regarding nature of the soil. General inspection of the site of work provides useful data regarding nature of ground (eg soft, hard, marshy or water logged), type of soil, behaviour of ground due to seasonal variation in the ground water level and stability of the ground. A good building site should be free of any likelihood of landslides due to unstable site slopes and subsidence due to any mining.

At the centre of the site, a square piece land- oriented to the cardinal points- must be dug out to the depth of one cubit (one and a half feet). The length and width of the pit should also be one cubit. This is done faultlessly so that the pit is neither too narrow nor too deep. The excavated earth should be stored nearby carefully. The wise architect should fill this pit with water at nightfall. At daybreak, he should examine the pit. If he sees small residual water, he is to consider this as a guarantee of success.

If the pit is damp, buildings built over this plot will be destroyed. If the pit is totally dry, harvests and riches will disappear.

According to another classic of vastu, once the pit is filled up with water, the architect takes one hundred steps away, t hen comes back to see what water remains. “AJITA”, another classic of vastu, says that the observer takes just ten steps. This test is done to check the porosity of the soil. The soil sucking all the water is more porous and less dense. It will be dangerous to erect building on this loose soil. The structure will start sinking in the future due to its own load.

There is another method of checking the bearing capacity of the soil. According to “Mayamatam”, the hole dug already in the first experiment should not be filled with water. It should rather be filled up with its own excavated soil. If the pit is completely full and no more soil remains, the plot is of average quality. If the pit overflows with soil, the site will prove excellent. If the pit is not packed full with the excavated soil, it is of inferior quality. Thus the success will expand, as does the earth.

This is the easiest method to know the compactness of the plot. A compact earth will occupy more space when loosened. A dense and compact earth is safe to carry the load of structure built over it. It will never give way. For very large areas, more number of such pits will be required for thorough examination of the land and soil.

The bearing capacity of a soil can be improved by compacting it with boulders or by driving piles. Soil submerged under water should be drained for improving its bearing capacity. Sandy and gravelly soil can be easily drained by this method. The soil is hardened afterwards by cement grouting or mixing chemicals in the form of diluted silicate of soda and calcium chloride.

Vastu classics classifies soil in four castes or varnas: Brahman, Kshatriya, Vaishya and Shudra. Varna literally means colour. Any person coloured with the occupations of learning, teaching, holy books and preaching is really a Brahman. True Brahman is not a person born in the brahman family. In modern context, Kshatriyas are the persons serving the police, military and defense services. Industries using fire, electricity, metals and chemicals on a large scale are also full of these people. People dealing in land and property are Kshatriyas. Footballers, boxers, archers, shooters and players of other violent games also fall in this category. People involved in cutting and sawing, butchers, hairdressers, welders, blacksmiths and electricians are some other modern kshatriyas.

People involved in agriculture, gardening, horticulture, trade and commerce, non- hazardous industries, export and import and such like other activities where money is the main consideration, fall in the category of vaishyas. Banks, share- markets, services provided with consideration are also covered under this category. Shudras are the persons engaged in illegal, unethical or anti-social practices, which are ultimately harmful for the general public.

I am giving here the quality of soil, land and vegetation for the above- discussed four categories of people. Apply these according to the occupations and interests of a particular person and never according to his birth caste. For example, a person having chemical industry(kshatriya category), will best flourish in a plot having red soil, which odours like blood, is pungent in taste and spiky plants bearing red flowers grow freely in it. His category is Kshatriya and must choose everything accordingly. If these qualities are not available in the land, go for proper interior and exterior design to include the same in articles, furniture and furnishings, colour design and the landscape.

This table has been prepared by following principles enshrined in vaastu classics; ‘Brihatsamhita” and “Mayamatam” and combining the same with practical needs and observations.

The water bodies also play a major role in affecting the Vastu of a plot. The location of ponds and lakes and any depressions in the following directions of the plot are listed.

Depressed water bodies are generally beneficial if located towards the north, north east or east of the plot.

If there is a depression in the north east, wealth will increase.

If there is a depression on the mid-east of the plot, it is auspicious. Excellent results are obtained. Finances pour in and profits increase.

If there are depressions in east of south east it might be beneficial. However in south of south east of the plot wealth will decrease and fire accidents may frequent. Harm to the residents from fire can be expected.

Depression in the south of the plot will cause trouble from competitors, local neighbours and others. Cash flow will be affected. People rarely achieve their objectives completely and promoters and labour are dissatisfied.

Depressions in the south west of the plot will cause needless controversies, labour troubles in case of factories and defamation for the owner. Such plots are bad for commerce.

Depressions in the west of the plot will cause substantial hurdles for establishment and running of the factory. The management will not be considerate to the labour troubles and problems will arise. In residential premises the residents suffer from hardships and sudden unfortunate calamities.

A depression in the west of north-west of the plot is bad for assets and wealth. This also leads to excessive expenditure and discord. In the north of North-west water bodies may add to wealth.

Depressions in the north of the plot are favourable and will make the wealth grow. Factories find improvements in all aspects. Women run units or industries making goods for female usage will succeed here.

In case of depression like a water body, the plot can be enclosed and levels changed within.

In case of a water body, in a wrong place the correction is to raise a large wall on that side. The water body should not be visible from the plot. The existing levels of the plot will be wrong as it will taper towards the water body. It has to be altered definitely to enable the south and western sides to be higher, with the south west corner being the highest. The materiel excavated for the foundation may be piled up in these areas. The rain water exit should be placed in mid-east, north east or mid north.

If there is a ditch with stagnated water directly opposite to the main gate, it is called as PANGA VEDHAI. It causes discontent and dissatisfaction. It may also lead to unhappiness.

If there is running water in the front of the factory plot even during non-rainy times it is called as AMBUNISRA VANA VEDHAI and it causes excessive and wasteful expenses for the factory. If unavoidable, as in the case of open drainage systems, it should be closed on the top and invisible to the viewer. Lakes in the north-east generate more wealth. The same holds good for rivers and streams too.

Several cities and towns in the country have rivers running in their midst.

The rivers flowing in the northern side of the plot are auspicious. If the flow of water is from west to east it brings abundant wealth to the residents.

The rivers flowing in the eastern side of the plot are auspicious. If the flow of water is from south to north it brings abundant wealth to the residents.

Running water in the south and west of the plot cause sudden arising of problems, and constant dangers.

The river or stream in the south causes the factory several problems. Even if the other Vastu characters give the factory wealth, the river will hinder the continuance of the same owners and the factory may change hands frequently. This does not affect the factory much, if care is taken and building is built sufficiently away from the river. The inter distance should be twice the height of the building. A compound wall is necessary if a river abuts the southern border of the plot.

The effect of the river flowing in the northern side of the plot from west to east is that a natural slope is towards the north east which turns out to be the lowermost point in the plot. The case studies indicate that those Vastu components bestowed by nature itself are more powerful than man made changes.